I often get asked how many dolls do I have? I usually take a guess, so I have decided to take photos of them.

Starting at the beginning with the Tendon production is my NP (NP is short for no philtrum, a philtrum is the two lines that are between your lip and your nose)

So below are some photos of Ida or was born in 1966 and her eyes were pained by Sara Doggart.

Ida is wearing a dress by Marilyn Hotchkiss and a pair of early JJ sandals,her teddy was made by me.

Staying with the girls for now, next up is Binkie who is a 1968 single fringe blonde, wearing a Petrana outfit and wearing a pair of shoes by Marti Murphy. Her bunny was made by me.

Still in 1968 , here is Red, another single fringe girl with tiny eyes. She is wearing an outfit by Storma, a pair of very early JJ shoes and her bunny was made by me. 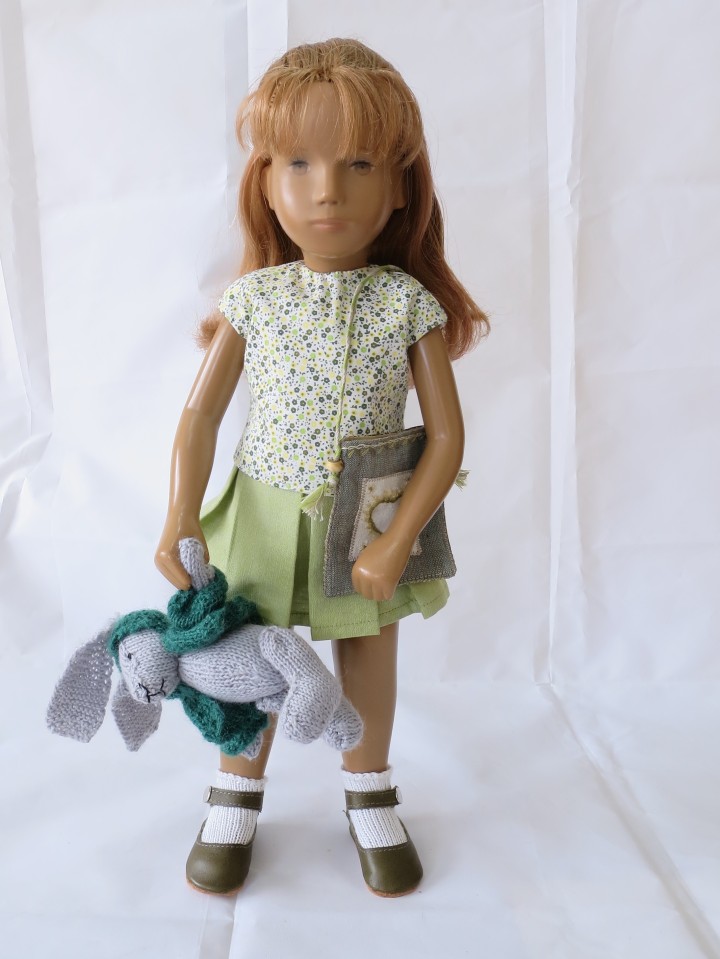 Still in 1968, next up is Bunty, this little lady is a waif and because of the haircut she received in her past, I am unable to tell if she would have been a single fringe girl or not. She does have a full centre part. Bunty is wearing a lovely dress by Marti Murphy, her shoes are by Craig Randall and her rag doll was purchased from Wacky Walker bears.

next up is a 1969 side part who had terrible falling hair and very faded eyes. I re-rooted her, although I still need to curl her fringe and I enhanced her eyes. She I wearing an outfit by an unknown maker and her shoes are by Betsy May.

Still in 1969 here is Ruth she is a 1968/69 full centre part Kilt girl. Ruth is wearing a rara outfit by Sharon Humphries and shoes by Marti Murphy. 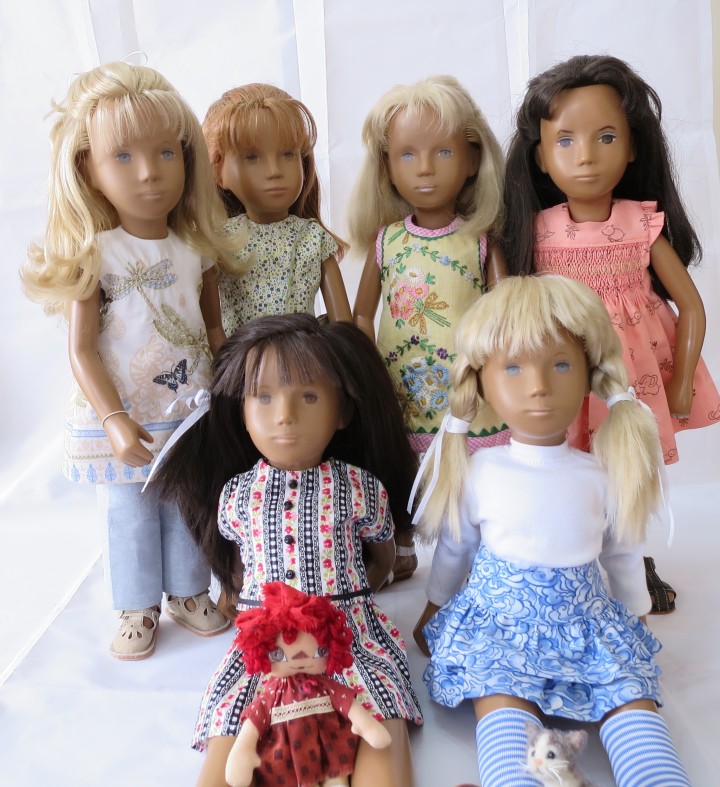 Carrying on with my English Trendon girls, we have Gracie who was born in 1970. Gracie has really beautiful eyes and very long hair, she is wearing a rara outfit by Sharon Humphreys and shoes by JJ. Gracie may be up for re-homing soon , so let me know if you are interested.

Next is Nuru who was born in 1972, she is a Cora and a very early one as her strings are all white. She is quite unique as whoever painted her face gave her one feathered eyebrow and one not. She has the golden eyes, which sometimes happens with the early Cora’s and Caleb’s due to the pigment used in the paint. Nuru is wearing a white dress Trendon outfit and shoes by Rosie Bloom. Nuru’s name means golden light in Swahili. 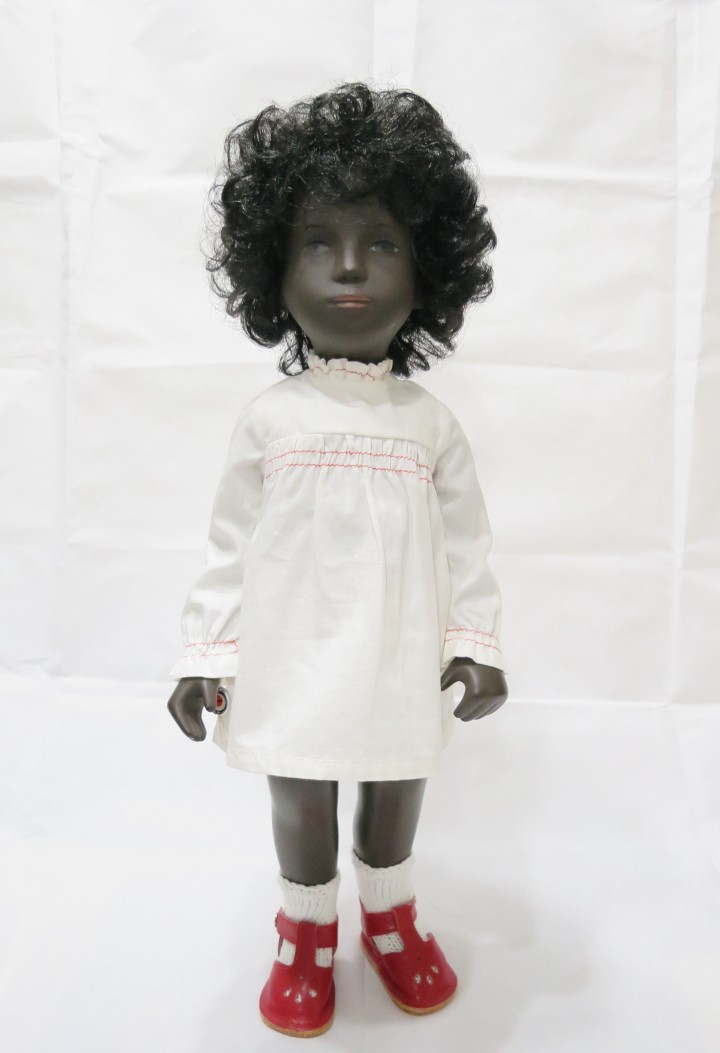 Moving onto 1973 we have Hope. Hope came to me as a waif with lots of problems, which I hope I have improved. She is the first doll that I re-rooted, re-strung and is always there when I need some help. Hope is wearing an outfit made by a lady in Germany and shoes by Rosie Shortell.

Next up is Pippin, born in 1973/4, she is the resident dog trainer and looks after Woof our dog. Pippin is a wider faced Brunette Trendon girl. Pippin is wearing a dress by Joanie B and sandals by Craig Randall. 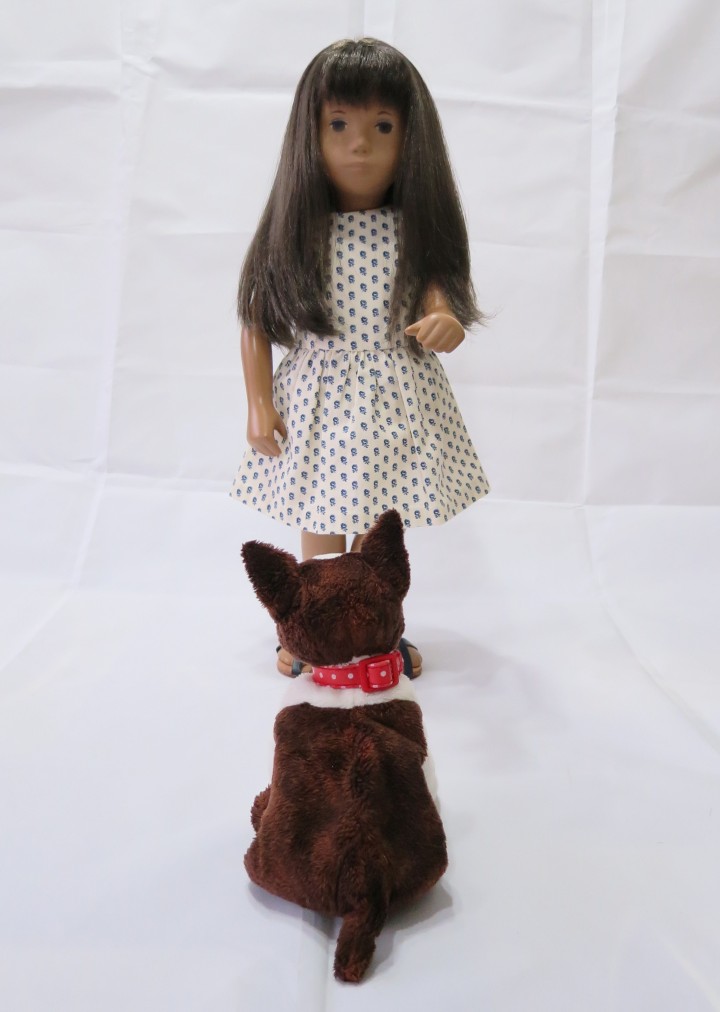 Into 1977, we have Ellie who is a gingham girl. Ellie is wearing her Gingham outfit and is ready to be re-homed. if you are interested please let me know. 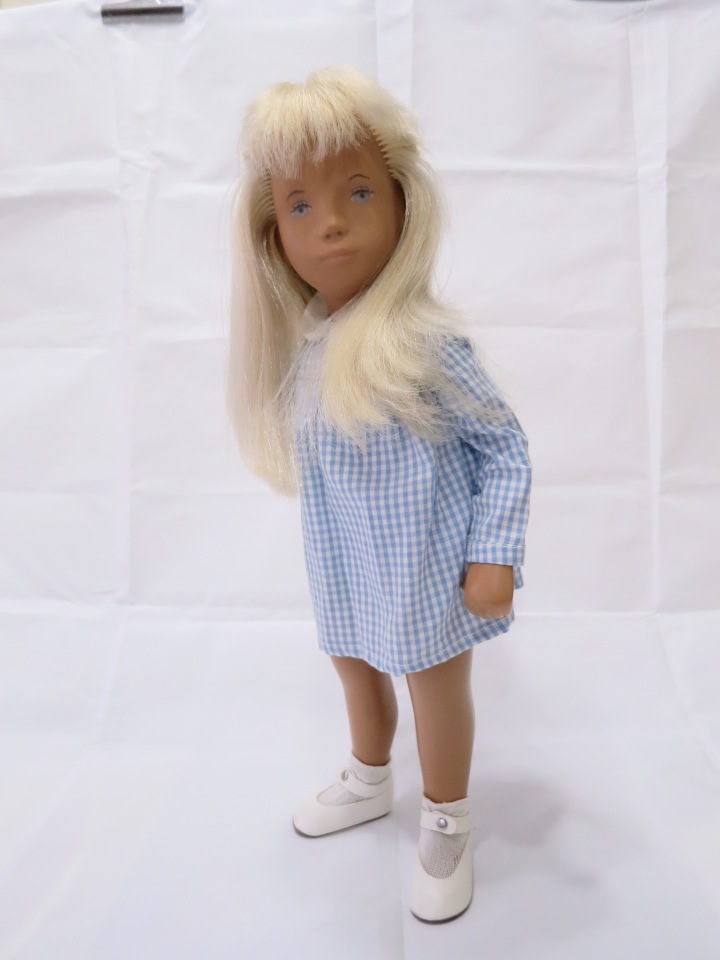 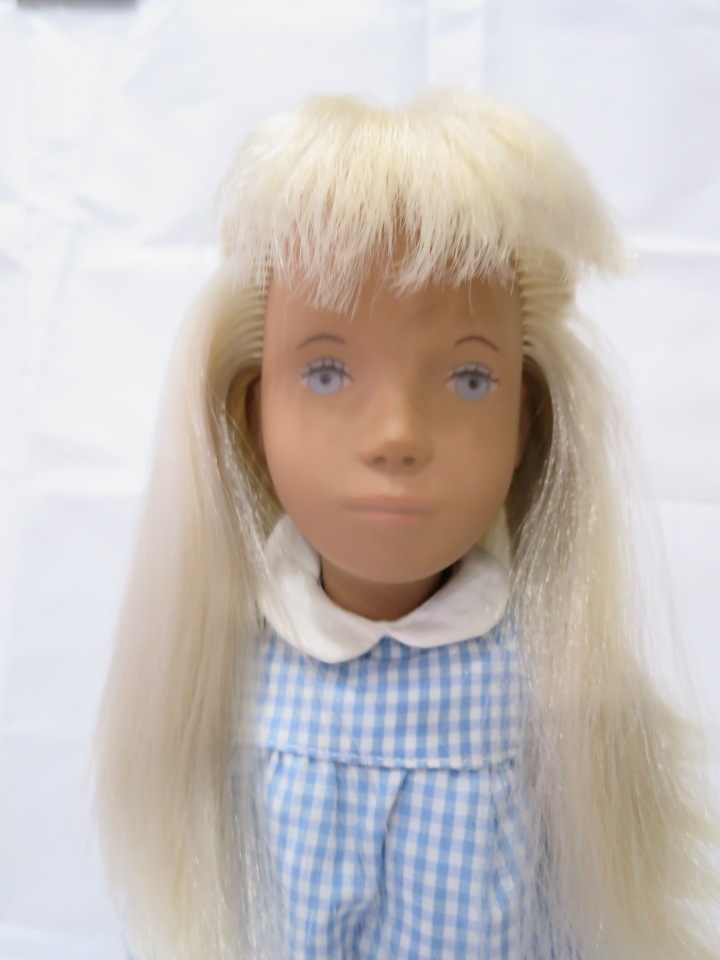 Next up is Tess who is a white dress girl born in 1979. Tess is wearing a rara outfit by Sharon Humphries and shoes by Marti Murphy. Tess may be up for re-homing soon, so if your interested let me know.

Next up is my made over Marina who was born in 1981. Unfortunately Marina’s hair began to fall very badly, so I sent her off to Alison to have her re-rooted with a single fringe and full centre part. I then asked shelly to paint her eyes and this is the result. Marina is wearing a dress by Vintage Sasha and shoes by Marti Murphy

Marina has been with me a few years now and she may be up for re-homing so if you are interested let me know. 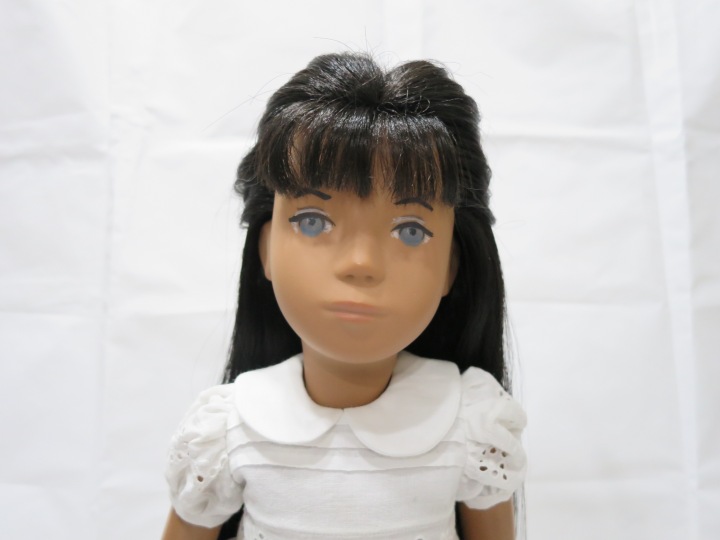 Next up are my Trendon babies. This is Bam Bam and early sexed boy wearing an outfit made by me a long time ago.

Next is Pebbles an early sexed Trendon girl wearing an outfit by Marilyn Hotchkiss and shoes by Marti Murphy.

My last baby is a later Trendon production , little Flower who I love dearly, wearing her original outfit. 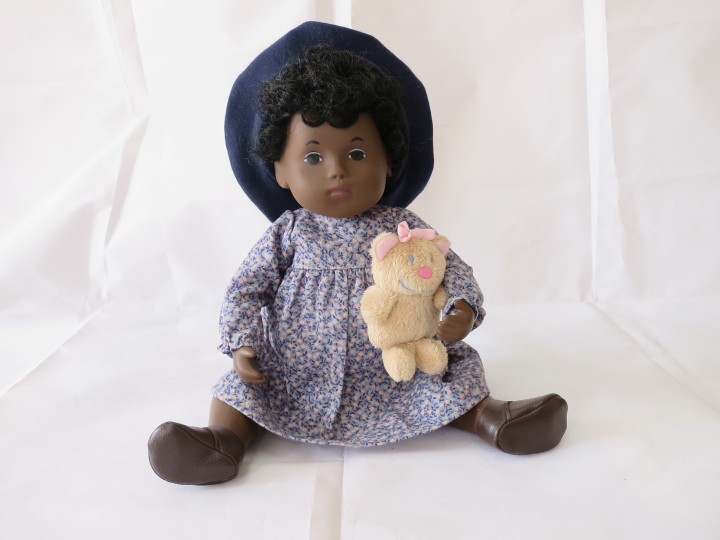 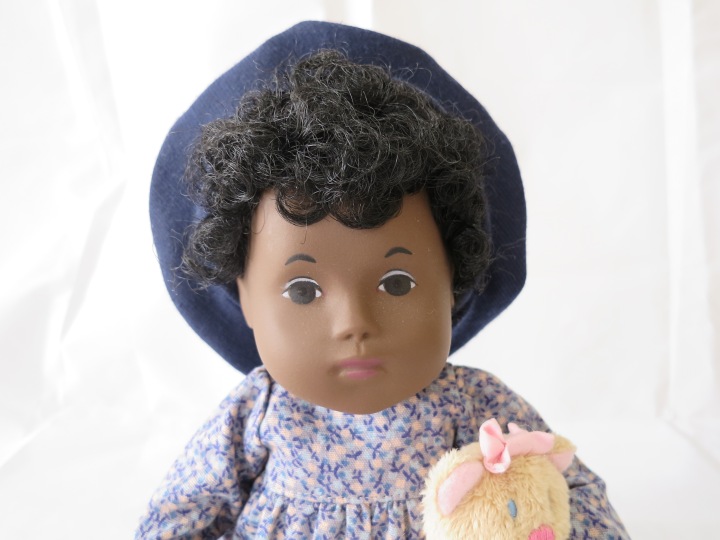 This next little lady is part of my on going Woddler project. 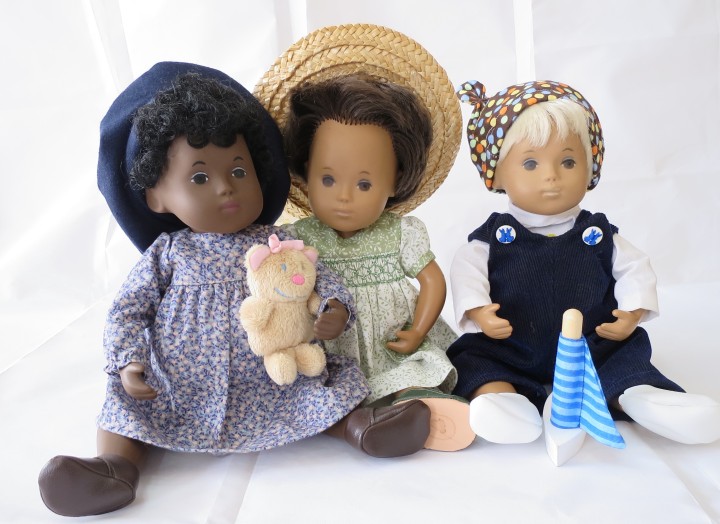 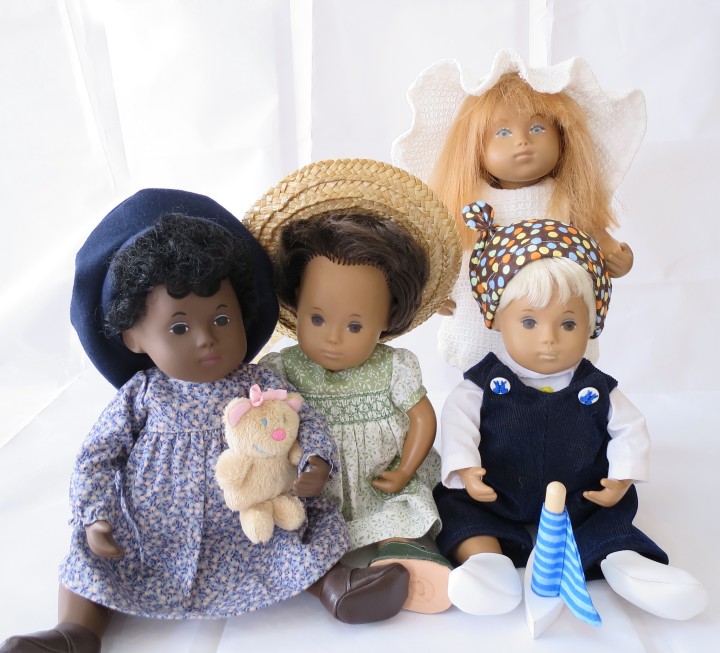 Well that’s all from the Trendon girls, the next post will be my boys. Thanks for looking.