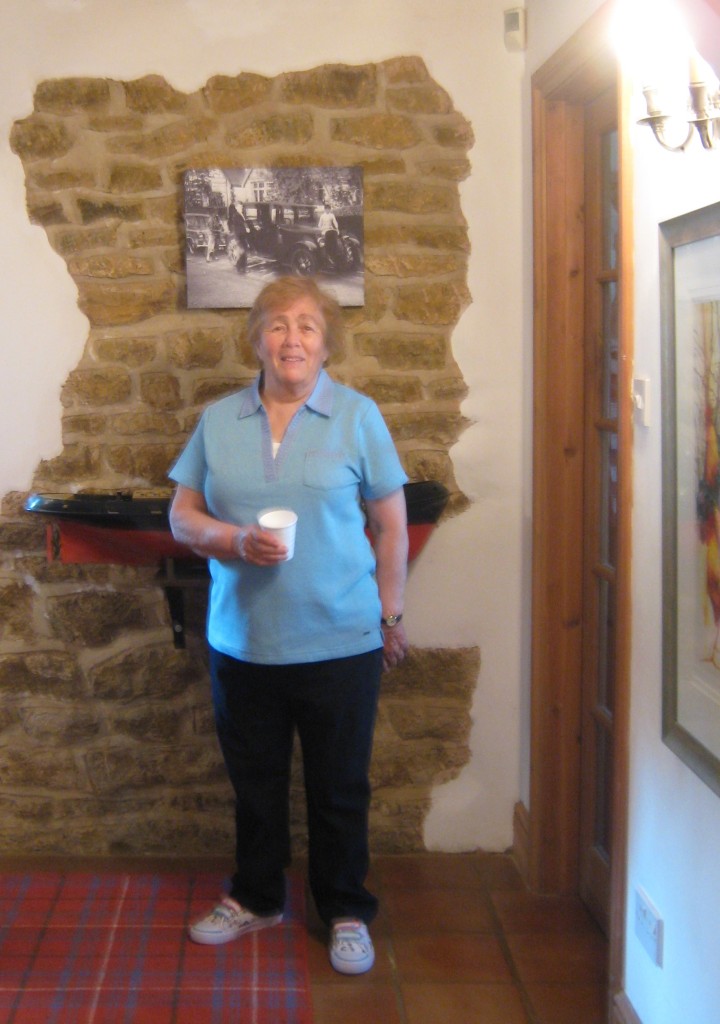 Hi everyone I am a bit late in posting this profile as I have had major computer issues.

I won’t keep you in suspense any longer, so without further ado.
I give you the lovely Dawn Law

(The photo above is a recent photo of Dawn)

At a Sasha Festival in the USA some years ago, I listened as a very knowledgeable Sasha doll collector suggested that most middle aged women who collect dolls, do so as the result of either a deprived or abused childhood. I do not fit into either of these categories having had a very happy and almost idyllic childhood.

We lived on the outskirts of a small village in rural Hertfordshire, and my early memories are of days spent playing with friends and a sense of complete freedom. We would knock on a friend’s door to find out if they could come out to play. We roamed the surrounding fields and woods in the school holidays, picking bluebells, bringing home tadpoles in a jam jar and watching them grow into frogs. It is so different now, who would let five and six year olds stay out most of the day, with a sandwich and some lemon barley in a string bag. As long as we were home by teatime, we were completely unsupervised. 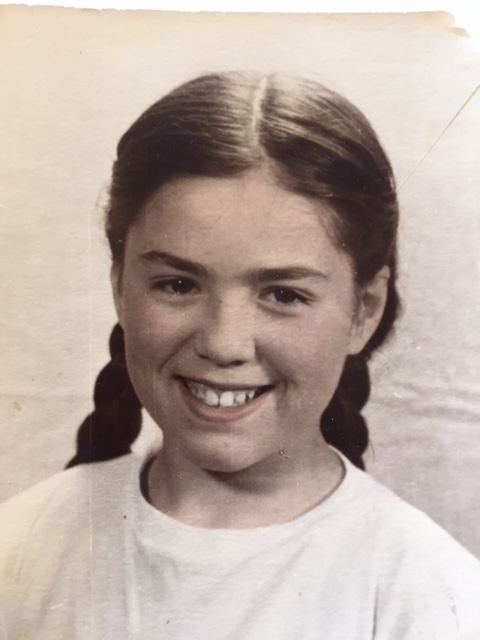 The primary school was more than a mile away on the other side of the village. At five years old, we walked there, returning home for lunch and back again, in all weathers and often alone. School was never closed, even if it snowed, we just went in our wellies and took shoes to change into.

I always loved dolls, doll houses, doll beds, prams and doll clothes. As a toddler, my earliest doll was made of rubber, from which I was told I was inseparable. She was probably very pretty originally but I only remember her in her terminal years as I grew older, by then the poor thing was limp and perished, and her face and fingers gone. She slept with a few other dolls and a teddy bear in a wooden drop-side doll’s cot at the foot of my bed. Mother had made sheets and a pillowcase from an old cotton bed sheet and knitted a multi coloured blanket with second hand wool. Her pram originally belonged to my cousin. It was old fashioned, dark red and quite small. Sadly, I remember, it only had three wheels, I forget what had happened to the fourth, but this was not too much of a problem, it just needed care to keep it balanced when pushing.

Christmas in our house was always special. My brother was twelve years old when I was born so I suppose I was the spoilt little sister. We had lots of Aunts and Uncles, and they always sent or brought lots of presents. I usually had a new doll, sometimes with clothes made or knitted by Mother or Gran. I remember receiving a Rosebud doll with eyes that opened and closed, and brown painted-on hair. I very naughtily chewed her hands, nibbling off all her fingers. I still remember the taste of the plastic. Likewise, the small pink plastic dolls that lived in my Triang doll house, – made of tin with green latticed windows that really opened, – they too were nibbled.

Apart from my dolls, I loved books. In those days we did not have so many and so they were read frequently. Through my books I could escape into an imaginary and pretend world. My favourites were the “Josephine and her Dolls” books written by a Mrs. Cradock, a series of books about a small girl called Josephine and her toys and dolls. I still have several of these books from my childhood, “Josephine’s Pantomime” being my special favourite. The dolls and toys in these books seemed to talk to Josephine, joining in her games. They lived in the “nursery” and played together when Josephine was asleep. I would creep into my bedroom very quietly, believing I would catch my dolls at play, or at least hoping to find that they had moved from where I had left them, but I never did.

When I was eleven years old, I outgrew the village school and went to the girls’ grammar school at Ware. This was an amazing place where we learned French and Latin and we had cooking lessons and also learned to sew. The first thing we made was a cookery apron. I found this very boring and was a very slow sewer. I remember the teacher finally congratulating me on completing the apron with some beautiful stitching. I did not tell her I had taken it home and my Mother had finished it. However I loved it when the following year we made a stuffed doll complete with clothes.

I don’t know what happened to my childhood dolls when I left home and married, but I think I may have passed my love of dolls on to our two daughters, our son preferring Action Man. The girls had the usual, nappy wetting Tiny Tears, Cabbage Patch and similar dolls, but it was when Penny, our eldest came home from her prep. school stating that the other girls, in fact “everyone” but her, had Sasha dolls. I had not heard of Sasha but not wishing to have a deprived child we all went to Osbornes in Oxford to buy a brunette gingham for her birthday. I was amazed at the price, costing a whole week’s housekeeping, needless to say Sasha was her only present. Later that year at Christmas she received a Baby nightdress. My Mother knitted jumpers and cardis and made tartan kilts and cotton dresses for Sasha, which Penny still has. It was not until 2012 that she told me that not “everyone” in her class had a Sasha doll, in fact there was only one girl who owned one, and she was the daughter of Lord Saye and Sele and lived at Broughton Castle! When daughter Hannah arrived she was given a black baby Sasha by her Aunt, who had also bought Sashas for her girls. This baby, the only Sasha in our family with a name is called Cola, She was much loved and even went to the beach with us where she was often carried in a pail full of sea water but lived to tell the tale and is still in perfect condition, despite a hard life.

(Above Dawn and Tim on their wedding day)

When daughter Penny married, I reluctantly said goodbye to her Sasha dolls. I had looked after them as she outgrew them, washing their hair, making sure they kept their original clothes and shoes, etc. but I felt she should have them. One day in Smiths Newsagents I saw and bought a doll magazine. There was a small sales ad. at the back for three Sasha dolls. I telephoned to ask the prices, to be told that the magazine was a month old and the dolls were sold on the first day, but as the buyer had never sent the payment I could buy them. They were an early brunette blue gingham Sasha with Prim snap navy shoes, nearly mint in her tube, her early Gregor Jeans brother, also in his tube and a blonde baby in her cradle. The lady told me she was selling them as she was down -sizing and had bought them just before the birth of her first child, hoping for a girl. The baby was a boy and she went on to have four more boys, so the dolls were hardly used.

This was the beginning of my Sasha collection. In 2000 I saw a small advert in the Doll magazine for a Sasha festival in Huddersfield. I knew very little about the history of Sasha dolls so decided to attend and hopefully find out more. I knew no one, but the first person that greeted me was Jackie Kraemer. What a wonderful weekend, it was here that I first saw a Studio doll. Wow! I thought, this is something else!, and Marie Morgan helped me onto the Studio doll slippery slope, so I blame her and my daughter Penny for my addiction.

(Above a couple of Dawn’s dress a sasha doll entries)

I acquired so many Sashas that Tim, my husband, made me a doll room above his workshop where they can live along with my Stupsi dolls, Fisher Price early play sets and Sylvanian Families collection. People often ask him how many dolls I have. His answer is ‘too many’.
I would be interested to know what part of my childhood may be responsible for my collection of Sasha sized prams. Maybe I do have a problem? Could it be that pram I had as a small girl with only three wheels?

Now some of you may or may not know that Dawn held one of her wonderful lunches recently, a great time was had by all whome attended and it gave me a chance to ask dawn some more questions for her profile.Dawn is a very modest lady and being one never to blow her own trumpet so to speak, so i will do it for her.

Dawn is quite the artist and whilst at her home i spied some of her fantastic art work. 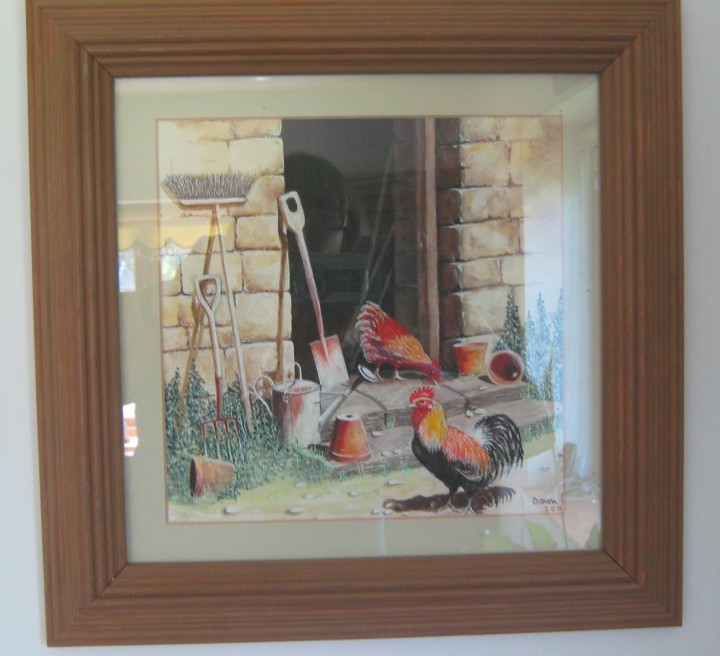 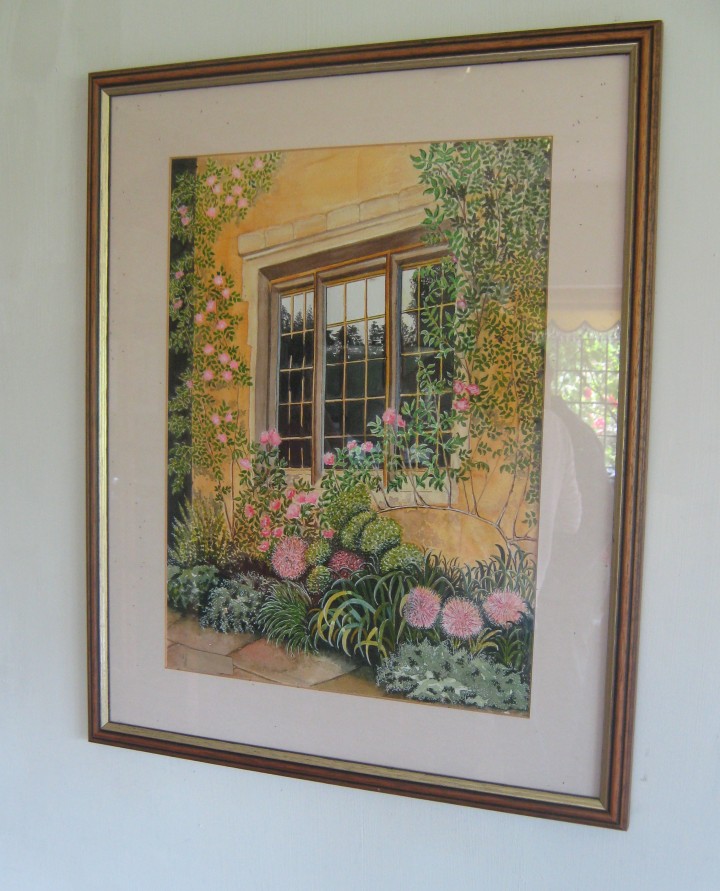 (Above are 3 painting by Dawn, they show parts of her home and are beautifully done.)

Inside dawns home I spied some moreof her unique artwork above the arches inside her home. 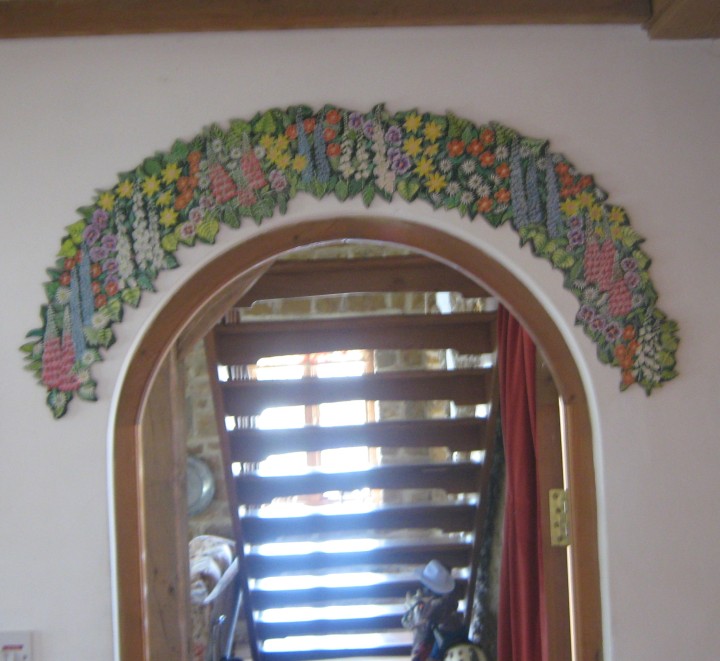 Dawns home is wonderful and i am going to leave part one here, so i will see you in part 2…..